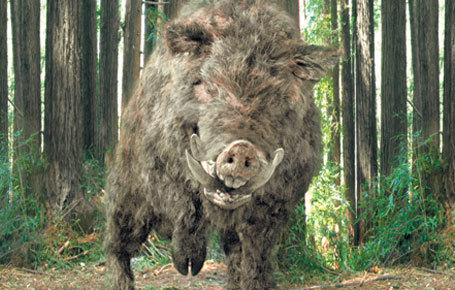 Different cultures have their own version of the dreaded lycanthrope. In the US, our culture is largely of European derivation, and as such we inherited the supernatural beast of the “Old Country,” where wolves were the most widespread and feared predator. Thus we have werewolves. In Africa they have were-leopards, were-crocodiles and were-hyenas. (One would expect the Dark Continent to have a more ample variety of pretty much everything.) India has were-tigers. One animal you don’t hear of too often as a candidate for a shapeshifter’s alter is the pig.

Pigs are more silly than scary, aren’t they? People who work with them will tell you differently. Especially in earlier times, when farmers didn’t have automation to keep pigs corralled and controlled. Pigs can be dangerous, and they will eat ANYthing, including human flesh. If the idea of a 700-pound brute with enormous tusks, possessing a taste for manflesh isn’t scary to you, you’re made of pretty stern stuff. The folklore concerning were-pigs may be a lot more scanty than that of werewolves, but it’s no less spooky. Don’t believe me? Read the attached article and you might just change your mind.