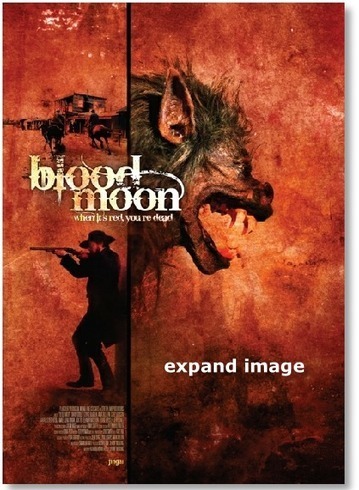 2015 British Film. A stagecoach full of passengers and an enigmatic gunslinger are held hostage by two outlaws on the run from the law but events take an unexpected turn when the travellers are stalked by a mythical beast that only appears on the night of a blood red moon.

No, I am NOT talking about the lunar eclipse, nor the prognostications of certain discredited religious fanatics that said eclipse signals the end of days. (A study of astronomical history reveals that such eclipses occurring at such “portentous” times is not that uncommon an occurrence, and biblical analysis reveals nothing substantive about this latest theorizing.) I am referring to the movie BLOOD MOON, opening in theaters in limited release on September 28th (the same night the aforementioned eclipse is set to occur, conveniently enough—well played, people who made that marketing decision, well played) and arriving on DVD the first week of October.
BLOOD MOON is a hybrid of Horror and Western, linking the legend of the werewolf to Native American myth. I’ve previously praised the movie’s practical effects, eschewing CGI in favor of prosthetics, based upon pictures I’ve seen of the cool-looking lycanthrope in question. And I’m pleased to report that, while the first reviews I came across were negative, now that more geek sites and geek credits have weighed in, the preponderance think BLOOD MOON is pretty nifty. I’m kind of excited to see it now, and not just because the Skinwalker (the Indian term for a werewolf) looks impressive.