Season 3 of SyFy’s Being Human just kicked off! If you’re a bit behind, or want a Season 2 refresher, then you are in luck because Season 2 recently came out on DVD and Blu-ray. Yay! Check out the goods below. 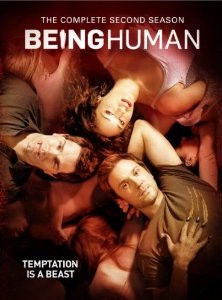 “Leading everyday lives is harder than it looks for three twenty-something supernatural roommates vampire Aidan (Sam Witwer),ghost Sally (Meaghan Rath) and werewolf Josh(Sam Huntington). Together, they share the creature comforts of a Boston brownstone while struggling to resist the temptations of their true natures and keep their secrets hidden from the outside world. “

Anyone planning on buying Being Human Season 2? Not me – one, because I have Netflix and Season 2 was just uploaded there, and two, I kind of lost interest. Gasp! I watched part of Season 2 and then just stopped. Maybe once I have the time I’ll get back into it. I am SO behind though.

About the Author
Moonlight (aka Amanda) loves to write about, read about and learn about everything pertaining to werewolves and other supernatural beasties. She writes for top genre sites like Vampires.com and Werewolves.com. You will most likely find her huddled over a book of folklore with coffee in hand. You can stalk her via her Twitter.

One of the writers for werewolves.com, as well as vampires.com.

View all of moonlight's posts.