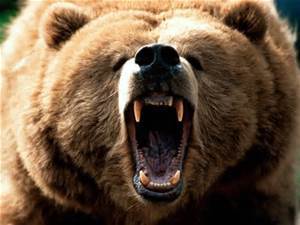 Black bears overrun a town in Russia, polar bears terrorize an Arctic weather station and grizzly attacks are up in the U.S. Is this a bear uprising?

Bears and wolves evolved from the same stock species. Take a close look at a bear and you can see the family resemblance. They are essentially giant canines, and if our European ancestors chose to bequeath the snarling wolf with the mantle of boogeyman, casting it as the four-footed effigy of an evil human necromancer in disguise, rather than the bear, it is only because wolves were more common, and perhaps because they were faster than shaggy, shambling bears. Also, wolves do that whole creepy howling at the moon thing. (It’s worth noting, though, that in Russia of the Middle Ages and beyond, a lycanthropic man was believed most likely to transform into a bear than a wolf.)

Wolves today have developed an instinctive fear of humans. Unless a wolf was dying of starvation or rabies, today’s average human needs have no fear of being attacked by a wolf in the wild. (Contrary to what certain movies, like THE GREY, starring Liam Neeson, would have you believe.) Bears, though, DO still attack people; usually it’s a mother with cubs attacking some camper who ventured too close for her comfort. If bears en masse were to decide to turn on humans, if, say, a decision was made at one of the yearly bear conventions that humans were now considered enemies of the bruin state, if bears were indeed rising up against us—which they aren’t—it’d be a scary prospect, wouldn’t it?