This was originally going to be a plea to help fund the kickass comic project Mongrel: SOB via Kickstarter, but when I went to write this post I discovered that not only had the project met its goal, it exceeded it. Woo! That means that we have a new werewolf graphic novel on the way! 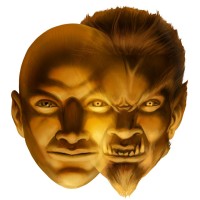 by Ed Dunphy with art by Andrew Mitchell Kudelka. Said to be one part The Howling and one part CSI: Chicago, this gritty murder mystery, set in 1990s Chicago, pits a monstrous werewolf against a veteran Chicago detective.

“Mongrel is a gritty urban horror comic co-created by writer Ed Dunphy and artist Andrew Mitchell Kudelka. The 3 issues of this 1990s-era, Chicago-based horror piece are entitled: ‘Urban Nightmare’, ‘Kinslayer’ and ‘Lunatics’. At its core, Mongrel is about 2 men locked in a life and death struggle, each hunting the other. Eric is a vicious werewolf who’s Hell-bent on destroying an established supernatural wolfpack, and Will is a tough-as-nails homicide detective who doesn’t even believe in the paranormal. As he investigates the gruesome string of murders on his turf, Will comes to realize how personally involved he is in all this mayhem.”

Here’s a page from the comic:

I am super geeked about this graphic novel. I love me some murder mysteries! Plus, as you can see above, the artwork is phenomenal. I can’t wait to get my hands on this one. How about you? What are your thoughts on Mongrel: SOB?

For more info check out the official Mongrel: SOB website.

About the Author
Moonlight (aka Amanda) loves to write about, read about and learn about everything pertaining to werewolves and other supernatural beasties. She writes for top genre sites like Vampires.com and Werewolves.com. You will most likely find her huddled over a book with coffee in hand. You can stalk her via her Twitter.

One of the writers for werewolves.com, as well as vampires.com.

Looks awesome – though I’m not a fan of the plot….very overused IMO, and I’ve seen the plot used many times before (not necessarily werewolf related):

Cop is assigned to solve mysterious murders – it turns out each murder was committed the same way…looking like a wild animal attack or something similar. Eventually he discovers his wife/brother/sister/a relative/etc is a werewolf, and was involved in the murders, or is otherwise suspected by the local pack. Ka bam.

Thanks for the love, Moonlight! Even though we exceeded our original goal, we are still raising funds though the Kickstarter in order to add other cool stuff to the graphic novel. Like what? Adding a brand-new illustrated Mongrel short story called “Why is there Blood on the Moon?” and werewolf pin-ups from some amazing artists who have taken a shine to our story. And temporary tattoos featuring Andrew’s Mongrel art.

By the way, SHowl, I know what you mean. But the original Mongrel story was written in the 1990s, so most of what you’ve seen plot wise has come afterwards. Of course, there are only so many plots out there. It’s what you DO with them and how you tell them that makes all the difference! Lust, revenge, dysfunctional families. These things have been around since the ancient Greeks, the Israelites, the Babylonians. And so have our werewolves…

The link to the MONGREL Facebook Fan Page: https://www.facebook.com/mongrelcomic