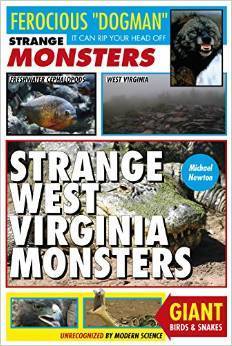 I received this book in the mail to read and review. STRANGE WEST VIRGINIA MONSTERS, written by Michael Newton and published by Schiffer Publishing of Pennsylvania. It was a quick read, which is either a good thing or a bad thing, depending on your personal preference. While Newton covers all the bases, even managing to hit on a few of the more obscure cryptids and spooks sighted over the State’s history—including a few that I had never heard of before—he doesn’t delve into much detail where they are concerned. The book isn’t thin, though. Instead it is packed with lush, full color photographs and artwork. Does the prevalence of the one make up for the scarcity of the other? As stated, it comes down to a matter of taste.

One thing that does come through in the words is the writer’s fondness for his subject matter. It’s hard, reading the book and pouring over the pictures, not to share in Newton’s enthusiasm. I did find myself at time wanting to know more about the particular subjects he was covering, but it’s possible that, with some of them at least, there simply isn’t any more information available. Other monsters would warrant an entire book all their own. This book, at least, serves as a nice buffet, offering a little, tasty bite of each case.

One reply on “A Book about Boogers and Beasts”